How Sustainable Is Bhar ?

The sustainability research project evaluates an unsustainable deal between “no plastic” and “zero waste", made by the Indian minister Piyush Gobal in 2019. He has attempted to avoid large masses of plastic tea cups and chosen to replace those with traditional disposable cups made from terracotta and called Bhar. 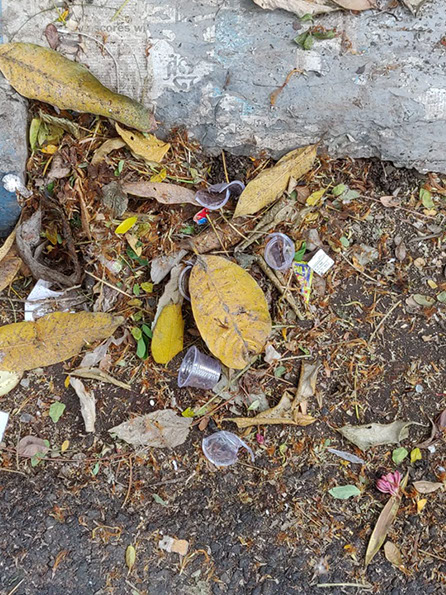 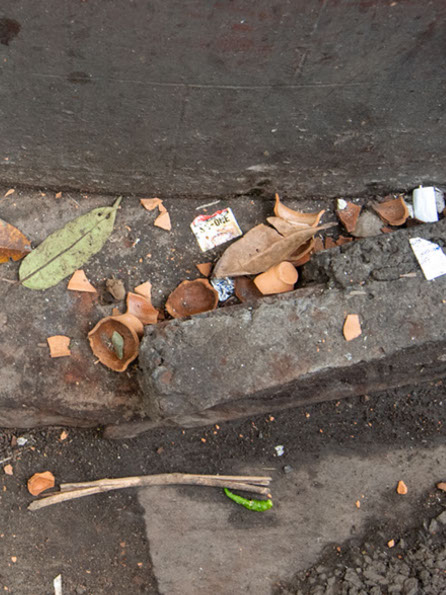 Indian minister Piyush Goyal has chosen to replace tea cups made of synthetic materials with traditional terracotta. Disposable terracotta cups have been used for generations and impart cultural, social, and spiritual aspects and are a symbol of Indian heritage.

The initiating motivation behind the project is the understanding that “cleaning the environment is not about changing the nature of waste”.

What are the cup's sustainability competences?

Step 3: Challenges in defining Bhar as a sustainable solution

This web page outlines some of the research points and focuses on the various design challenges of making the cup sustainable. 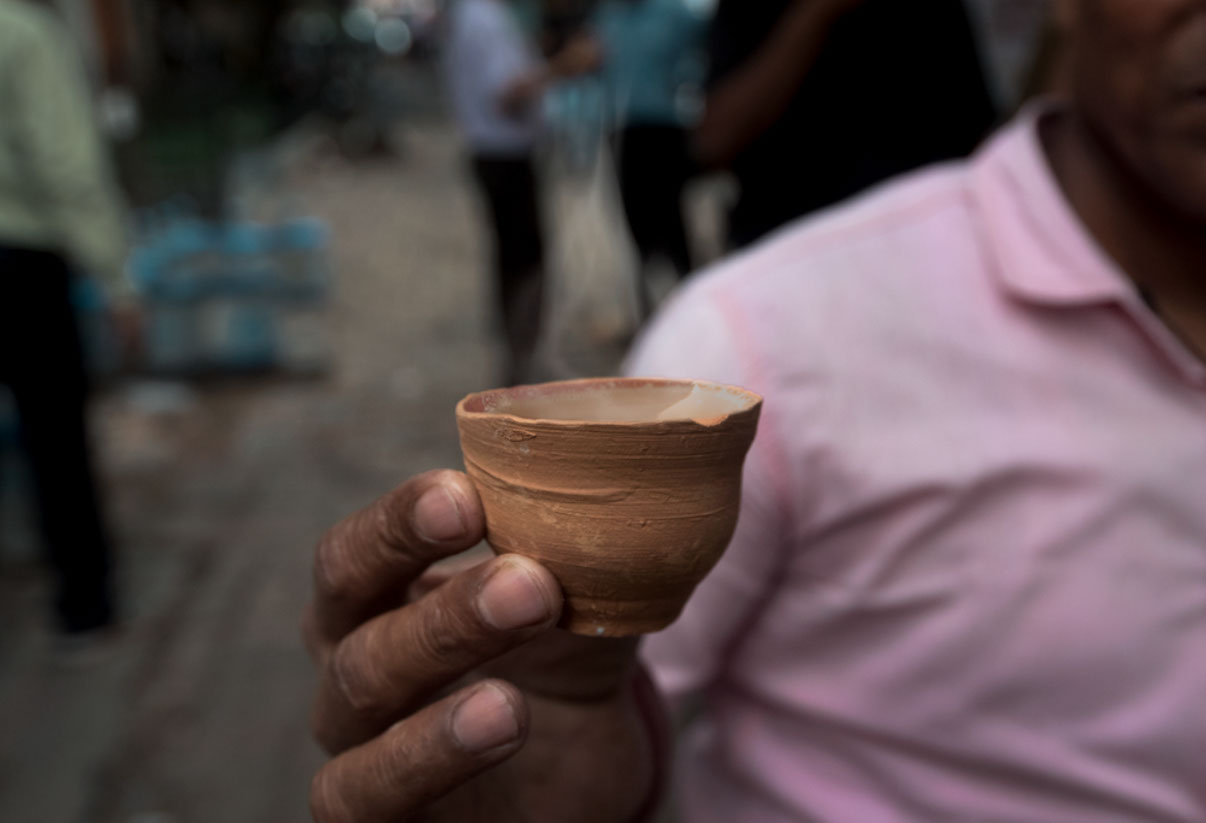 Terracotta cups have gradually given way to polystyrene and coated paper cups in the last decades due to their higher convenience, such as the ability to carry them in big stacks, and the lower prices of purchase.

India is home to one-sixth of the planet’s humanity and fastest growing economy, which makes the country a key player in ensuring a sustainable future.

The design project visualises the multifaceted world of the traditional cup from India and includes its sustainability challenges.

The research question “how sustainable is Bhar?'' explores the ability of the terracotta cup to be a valuable alternative to plastic cups in India. The ethnographic research reveals the socio-cultural influence of the cup.

Kolkata is a location in India where the tradition has been maintained and represented with pride. The integration of the cup into everyday life and the potteries that still exist in the district are features that distinguish Kolkata from other cities in India. 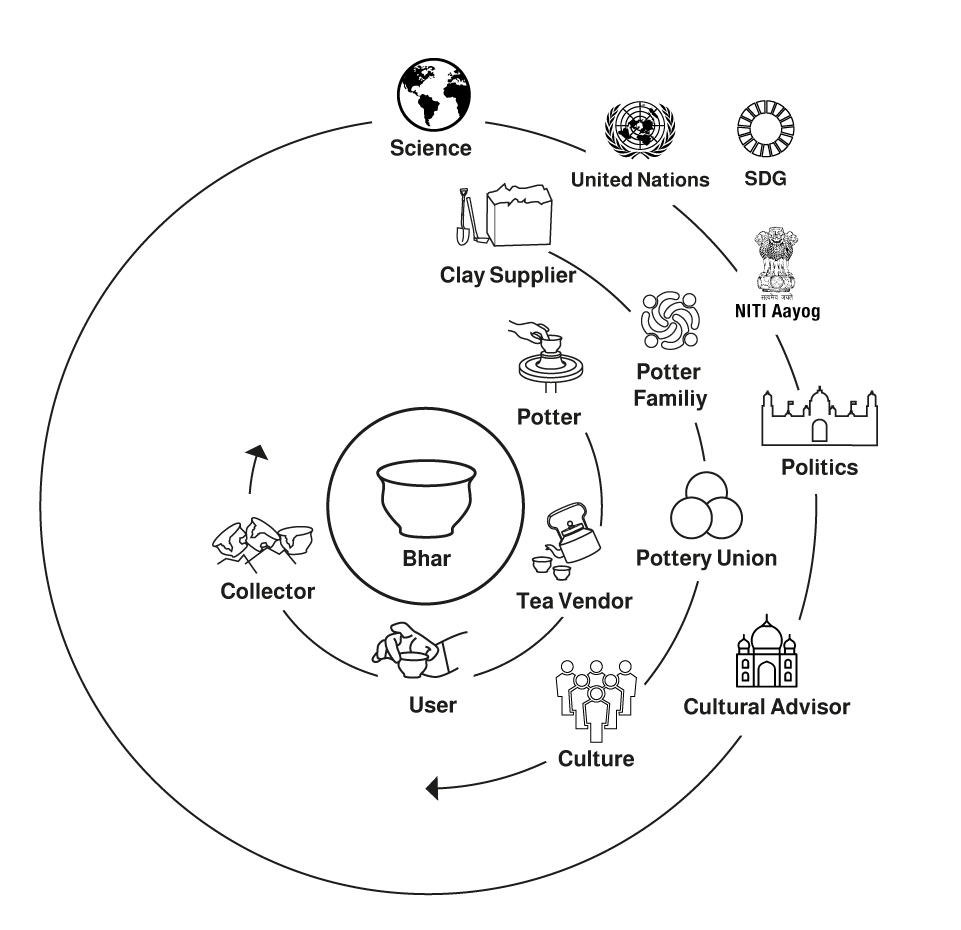 Introducing a new policy or deciding on an innovative change requires the recognition of the opinions of all stakeholders. Who is involved and what are their opinions? 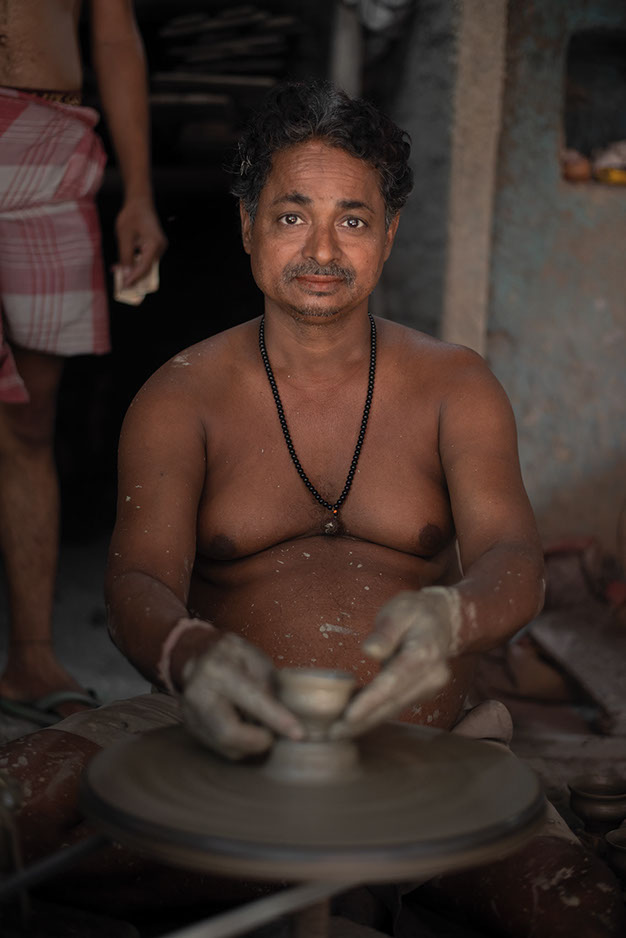 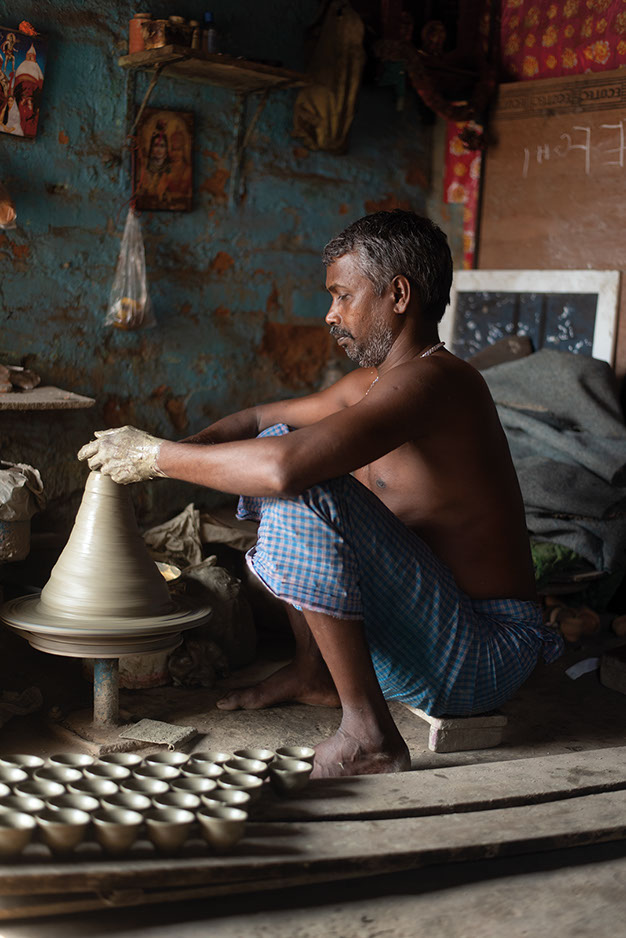 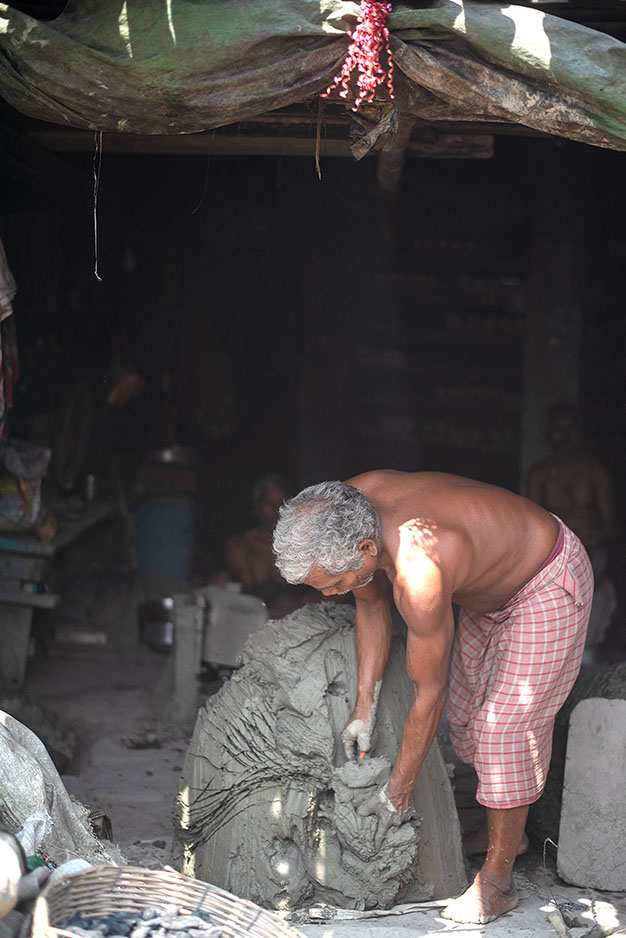 Ramdjar has been a potter for 30 years and has learned the craft and techniques of making Bhar from his father. He delivers to 4 different tea vendors in Kolkata. His wife helps with piling up the cups in the kiln and his mother uses the workshop to cast spiritual and decorative bowls. The family is not part of a union or association. He lives with his wife and two kids in the space above the workshop.

What makes the cup and your craft special?

Ramdjar prefers to drink his tea in Bhar because of its flavour. However, he does not see the cup as a handmade product with special value besides its role in the possibility to make a living.

However, he recognises his own signature in making Bhar which relates to the techniques he has learned, his fingerprints on the cups, or small inclusions via the characteristics of his clay. He recognises that each region in which clay is dug has its unique properties such as colour and texture.

Do you think the cup can be reused or recycled?

Ramdjar is convinced that no-one would drink out of a cup which had been used by someone else before.

He believes that terracotta is biodegradable and decomposes back into mud.

Vendors and tea drinkers celebrate the traditions and enjoy the earthen flavour that is added through wet terracotta. 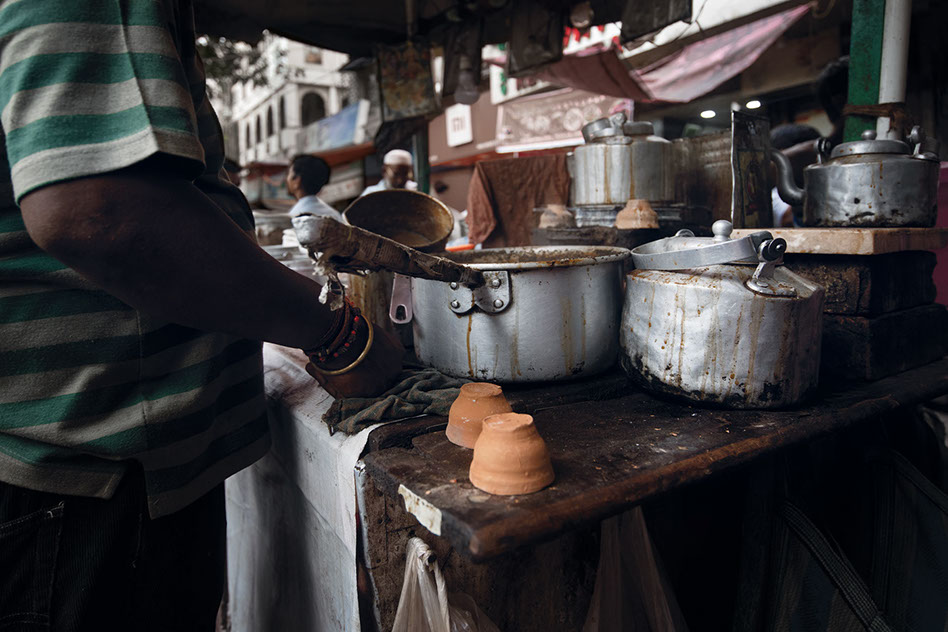 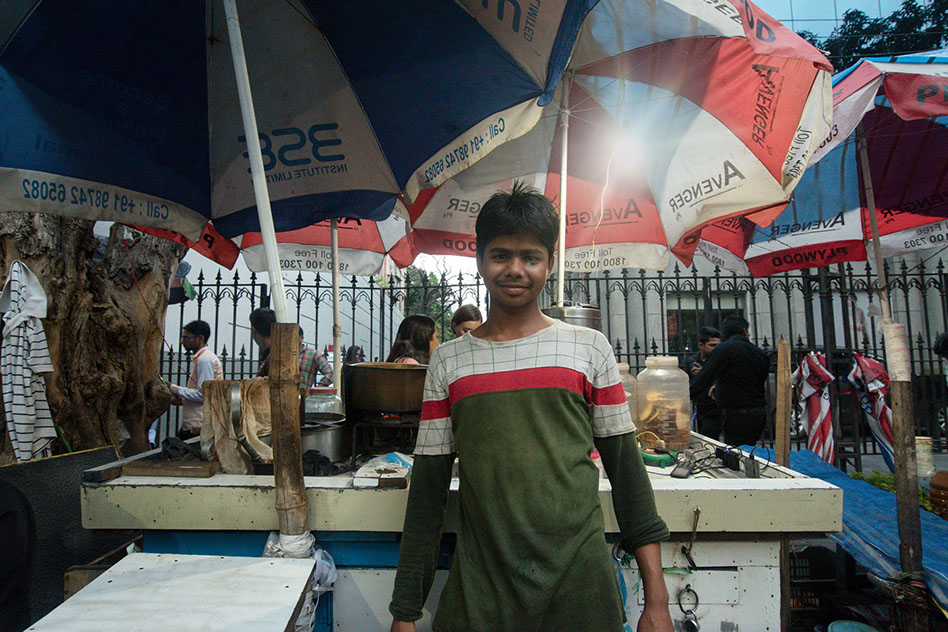 Product and material analysis of Bhar

Colours: reddish-brown to yellowish to orange with greyish to purple discolourations

The ife cycle of Bhar includes four stages: source, execution, utilisation, and discard. The assessment diagram show 12 steps and starts with mining the raw clay. It visualises the material processing, manufacture, distribution, use, and disposal.

The supply chain of the cup is simple and transparent: each potter family distributes the cups to the nearby vendors and street sweepers take the cups to the local landfill after use.

Bhar is manufactured within two days and daily distributed to local tea vendors. The average tea drinker empties / uses the cupand within a 15 minutes. 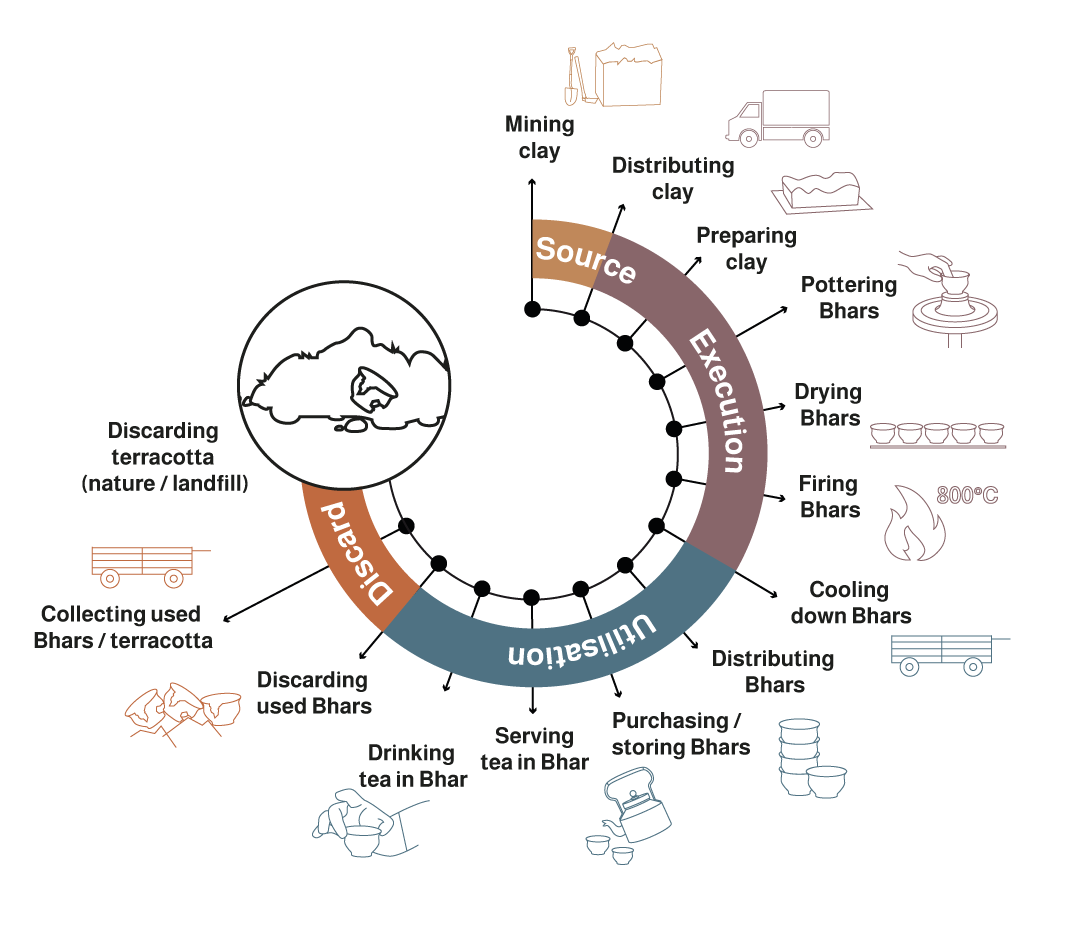 Terracotta is generally seen as a biodegradable material, which leads to the understanding that its life cycle is closed and ends with the decomposition into sandy soil.

Tradition believes that the clay returns into soil and shows a perfect ecological model.” But from a neutral perspective of a material scientist, Bhar loses its plasticity and possibility to biodegrade back into mud during the firing process. The characteristics of clay impart a change in the material’s structure when firing above a temperature of 200 degrees Celsius. Clay changes into a ceramic material.

Challenges in defining Bhar as a sustainable solution

Piyush Goyal’s project follows the global goal by the UN to protecting life on land. His concept his called "make India plastic free" and his strategy defines to prevent plastic waste. The minister's goal has been to avoid disposable plastic teacups for which he attempted to only utilise the disposable teacup Bhar. His solution are supposed to include the benefits of supporting traditional crafts and promoting Indian heritage.

The fundamental research of “How Sustainable Is Bhar?” illustrates the differences in motivation (goal) and perspective (solution), as well as between sustainability development, policy decisions, and real life. It presents a treasure trove of different statements on Bhar from a wide variety of positions, such as opinions from the natural and cultural sciences. This enables designers to identify relationships among individual stakeholders and contexts.

The challenge of this project is to analyse the Indian minister’s project by looking at the traditional cup through many different eyes and placing these insights in context with each other. The project’s process clarifies possible hurdles and provides new challenges for positive change. A positive change for Goyal’s project is to realise the initiative by expanding the original strategy of "no plastic waste" to "zero waste".